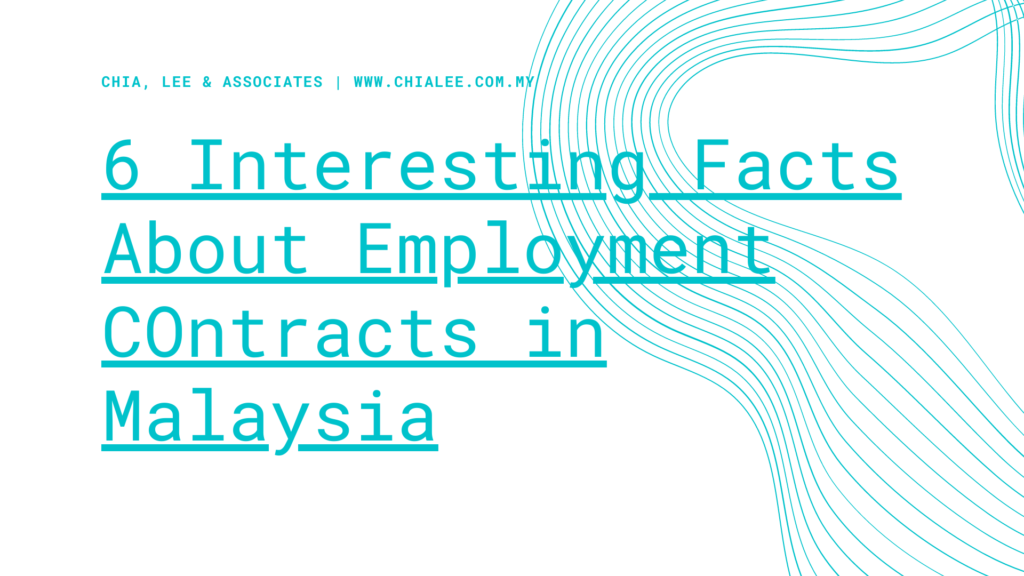 Premised on the existence of such relationship, there are various protections and remedies found under the Malaysian Employment Law (either from the statutes (or Acts of Parliament) or case laws), other than those provided under the employment contract for the benefit of the employers or the employees.

Therefore, it is always advisable to have a written form of an employment contract signed by both the employers and the employees.

Apart from being a proof for the existence of an employment relationship, there are some other interesting facts about employment contracts which will be further expounded in this article.

1) There are Implied Conditions by Law!

Despite an employment contract being agreed and signed by parties at free will, but subject to the employee fallen under the purview of the Employment Act 1955 (“the EA”), it is the law that any term and condition of the employment contract, which is less favorable than the provisions under the EA shall be ‘void‘, as per 07a7b8Section 7 of the EA.

Section 7 further states that such terms which are less favorable shall be substituted by those prescribed under the EA.

Another prominent example will be under Section 20 of the Industrial Relation Act 1967 (“the IRA”), any termination clause in the employment contract shall be taken to add in the condition that any such termination of the contract by the employer, must be with ‘just cause or excuse’.

It is understood that the law recognizes the disparity of bargaining power between the employers and the employees and such laws of employment were enacted to safeguard the interest of the employees against such less favorable contractual terms, which were often accepted by the employees without full volition.

The existence of an employment relationship allows such future disputes to be resolved via access to the Labour Court and Industrial Court, which are ‘alternative’ dispute resolution methods with much lower cost and at least technicalities compared to the court system.

The Industrial Court, as established under the IRA, has the following adjudicative powers:-

(a) to decide on the applications for recognition of collective agreements;

(b) to decide on the interpretation or variation of awards or collective agreements which are directly referred to by the parties in dispute;

(c) on cases of unjust dismissals;

(d)  on cases of constructive dismissals (i.e. changing of an employee’s job or working conditions with the aim of forcing their resignation);

(e) trade disputes (meaning disputes between the employer or employer’s union with a trade union of employees);

(f) victimizations (meaning disputes between the employer and employee that occurred due to the employee joining a trade union).

The downside is that the Industrial Court does not have direct access to deal with the employee’s complaint in such cases of (c) to (f) due to such complaint must be first lodged to the Director General of Industrial Relations (“DGIR”) under the Human Resources Ministry.

The DGIR shall play a conciliatory role. It is only when the conciliation process fails, the DGIR will notify the Human Resource Minister for a decision whether to refer the case to the Industrial Court.

In other word, the Industrial Court is only sanctioned to adjudicate those cases upon reference by the Human Resource Minister.

Premised on the above, it renders the supposedly speedy nature of such dispute resolution method in doubt.

The Labour Court’s decision, however, may be appealed against at the High Court as provided under the EA, whereas the Industrial Court’s award may be reviewed in the High Court.

Such remedies are peculiar to the Industrial Court only in cases of dismissal without “just cause or excuse”.

Such remedies are alien to the civil court because a contract to render personal service cannot be specifically enforced under the Specific Relief Act 1950.

However, it must be remembered that in order not to be deprived of such legal rights conferred by the law of IRA, an aggrieved employee must first lodge a complaint to the DGIR within 60 days from the date of such unjust dismissal.

4) Collective Agreement, if existed, shall form part of the Employment Contract

Earlier, we mentioned that Malaysian Employment law is founded in statutes (or Acts of Parliament) or case law.

There is, in fact, another source of law applicable to employment which is Collective Agreements, if any.

The Collective Agreement, once taken cognizance of by the Industrial Court, has the effect of being incorporated as implied terms into the existing and future employment contract between the employee and employer of the said trade as mentioned in Collective Agreements, pursuant to Section 17(2) of IRA.

A Collective Agreement is an agreement that entered in between the employer or employer’s union with a trade union of employees.

The general rule of privity of contract states that a contract cannot confer rights or impose obligations arising under it on any person except the parties signing the contract.

A Collective Agreement is technically signed by the trade union representing the employees and not the employees themselves, which effectively ignores the doctrine of privity of contract.

Be that as it may, Collective Agreement normally contain better terms and conditions of employment for the employees in the particular trade that were achieved through collective bargaining between the parties concerned.

It is worth noting that according to Section 14(3) of IRA, any terms or conditions of employment as contained in the Collectives Agreement, which is less favorable than the EA, the IRA or any other written law applicable to employees, shall be void and of no effect to that extent and the provisions of the EA, the IRA or any such written law shall be substituted thereto.

(i) no contrary terms in the employment contract, which means such implied right can be contracted out;

(ii) bona fide and in the interest of business;

(iii) not influenced by an indirect motive leading to resignation;

(iv) not made for the purpose of harassing and victimizing the employee; and

(v) does not involve a change in the conditions of service.

as seen in Ladang Holyrood v. Ayasamy a/l Manikam & Ors [2004] 3 MLJ 339. Premised on this, it is advisable that an express term is inserted into the employment contract to allow for transfer in order to prevent future dispute as there is a possibility of such right being contracted out.

“according to equity, good conscience and the substantial merits of the case without regard to technicalities and legal form” which allows Malaysia’s employment law to evolve into what it is today.

This article was written by Chia Swee Yik, Partner of this Firm (+6016 2148 218, chia@chialee.com.my), who endeavor to provide practical advice on employment law.

Feel free to contact him if you have any queries.

Share this ArticleLike this article? Email it to a friend!
Email sent!